A Golden Retriever Pitbull is a crossbreed between a Golden Retriever and an American Pitbull Terrier. They are large dogs with high-energy and are high-maintenance. This type of mix is known to have health issues. While they are extremely friendly, keep in mind that this mix has Pitbull blood. 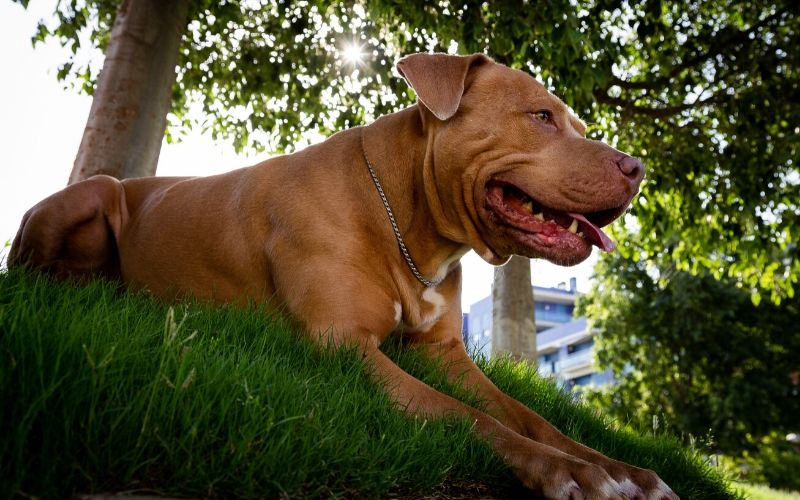 This type of Retriever Pit can have a variety of coat colors, lengths, and thicknesses from the crossbreeding of its parents, which will directly affect its grooming needs and how much it will shed. No matter the coat, it will end up being a large dog.

Weight & Height
This mix is a large dog when fully grown, weighing around 30 pounds to 75 pounds (14 kg to 34 kg). It generally grows to be 17 inches to 24 inches (43 cm to 61 cm) tall. The females are generally a little smaller and lighter, but not always.

Coat Color
Goldens and Pitbulls have very different coats, so their offsprings’ coats have a wide range of possibilities. Common coat colors for a Golden Retriever Pitbull are golden or yellow, or a white base with black and/or brown on top of the white base.

Coat Length & Thickness
There is a wide range of coat lengths, from short, fine and thin, to medium and long. If the coat is long, it could be shaggy, wavy, or even have some curl to it. Just as the color and length vary, this mix may have a single or double coat. 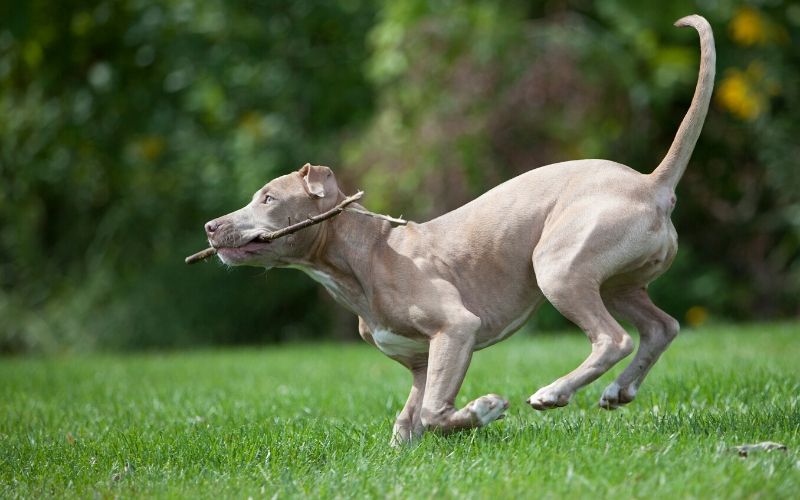 This breed is said to be one of the friendliest dogs ever, and devoted, loving, loyal and playful. But mixed breeds are by nature unpredictable, and you might have a dog with the personality of either of its parents, in this case, the Golden Retriever, or the American Pitbull Terrier.

Does Not Like Being Alone
The Golden Retriever Pitbull mix is social, with humans and other dogs. It loves attention and does not like being alone. It can develop separation anxiety, which is not uncommon in dogs, and might end up barking, chewing, and digging. It is not known to be territorial.

Barks Loud and Likes to Chew
It is known to chew, play-bite, and bark excessively at night, so it must be trained to stop these behaviors. In 2013, a Golden Retriever won a spot in the Guinness World Record for the loudest bark at 113.1 decibels, as loud as a rock concert. 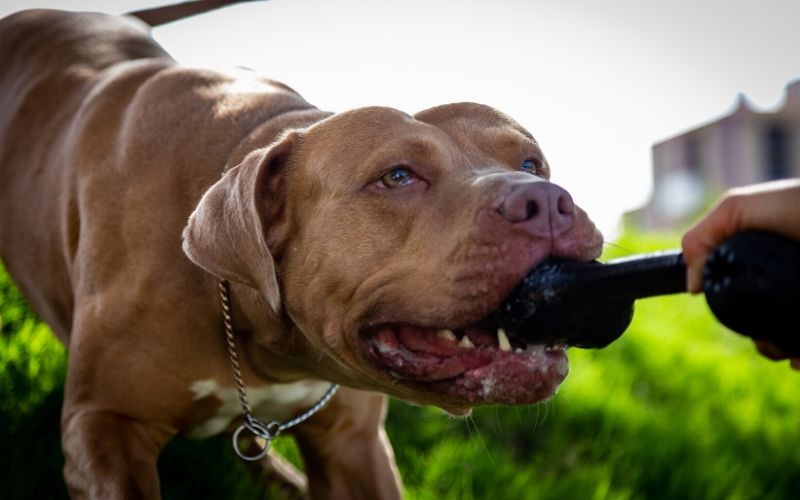 Has an Unpredictable Personality
In addition to having a very loud bark and potentially barking a lot at night, this mix is said to have an unpredictable personality. Your particular dog may end up acting like either of its parents, the Golden Retriever, or the American Pitbull Terrier, depending on its genes.

Not as Aggressive as You Would Think
The Golden Retriever Pit is not said to be aggressive or to be a fighting dog. But we cannot ignore that Pitbull is in its bloodline, and Pitbulls were bred for dogfighting. Also, one of its direct parents, the American Pitbull Terrier, is somewhat likely to show aggression.

Preferred Climate Is Warm Weather
This mix has an array of coats, so the ideal weather for your dog will depend on its coat. Short single-coats will do best in warmer weather, especially if the coat has a light color. Long and thick double-coated dogs, especially with dark-colored fur, will thrive in colder temperatures.

The Golden Retriever Pitbull mix is said to be good with kids, other pets, and as a service dog, but keep in mind that every dog has its own character. It is also said to be an excellent watchdog, but only conditionally suitable for senior citizens or apartment living. 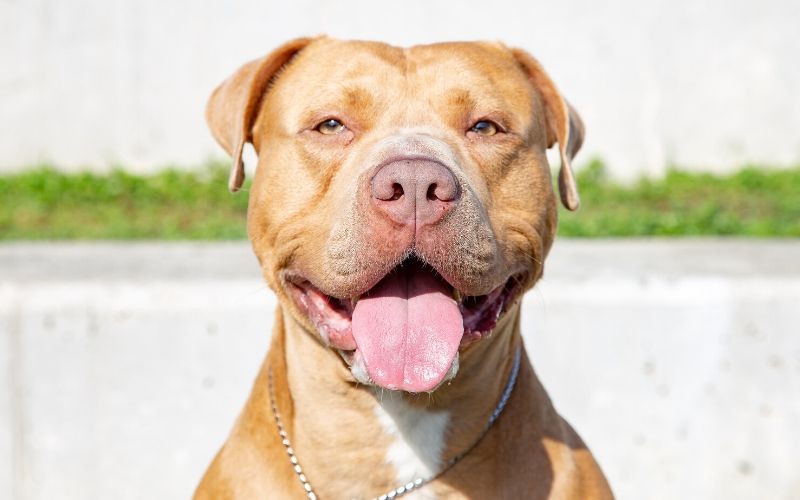 Is Not Apartment Friendly
The Golden Retriever Pitbull loves to be active. They are large dogs, have an enormous amount of energy and need regular exercise. They would not do well in an apartment unless they receive sufficient daily exercise, social interaction, and were trained for an apartment environment.

Is a Perfect Watchdog
This type of Retriever Pit mix is reported to be an excellent guard dog because it is protective of its owner and its owner’s family. Its parent, the American Pitbull Terrier, is known to be a first-rate guard dog, who is alert and has unrivaled courage in protecting its family.

Not Very Senior Citizen Friendly
Senior citizens often experience a decreased or slower activity level than would be ideal for the high-energy and high-maintenance Golden Retriever Pitbull. It this dog’s needs are met, it may be a suitable choice for a senior citizen, but there are other breeds that would be better choices.

A Great Service Dog
This type of Retriever Pit is a good service dog and therapy dog. It is also a great emotional support animal, like its parents. The Golden Retriever is a top choice because of its loving, eager-to-please nature, and the American Pitbull Terrier is a devoted dog who craves family time.

Tends to Get Along with Other Pets
This mix is reported to get along well with other animals, and one parent, the Golden Retriever, is frequently ranked as the top dog for getting along with cats and other dogs. Remember that every dog is different, and animals should always be introduced to each other safely.

This type of Retriever Pit suffers from many of the health issues that afflict other large dogs, and often has many of the health problems that a Golden Retriever would have. Some of the issues are preventable only if the breeder has eliminated those issues from the bloodline. 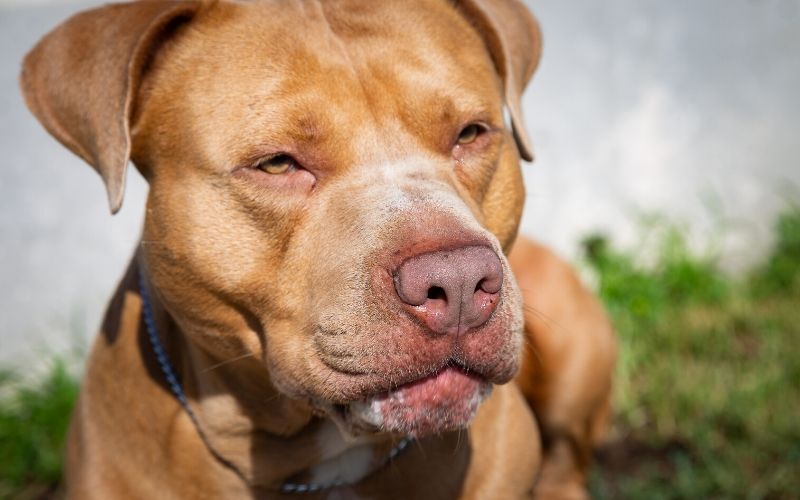 Bloating (or Gastric Dilation Volvulus)
Bloating may happen 2-3 hours after eating, or at any time. Your dog may dry heave, or its stomach might be swollen and hard. It might have difficulty breathing or getting up, be drooling, or be in distress. This is a health emergency that may result in death.

Your dog could have a preventative surgery called a gastropexy to prevent bloating. To a lesser extent, you can decrease the chances of bloating by feeding your dog from a bowl on the ground (as opposed to from an elevated surface) and feeding it twice a day.

Hip Dysplasia
As your Golden Retriever Pitbull ages, it may develop hip dysplasia if you are not meeting its nutritional and exercise needs, or if it becomes overweight. Hip dysplasia will make it hard for your dog to walk, run and jump, and will cause it pain.

Hip dysplasia is hereditary but said to be preventable by feeding your dog a nutritious diet with supplements for its bone health, making sure it gets adequate exercise, and keeping it at a healthy body weight. Before purchasing your dog, consider asking for its hip score for each hip.

Elbow Dysplasia
Elbow dysplasia is a developmental problem that results from an error in the genes that develop the elbows. Being overweight as a puppy, getting too much exercise, or growing too fast may cause elbow dysplasia. It will make it hard for your dog to move efficiently and might cause lameness.

Elbow dysplasia is hereditary, but keeping your dog lean during its first year of life while its bones are forming is helpful. Continuing to control your dog’s weight and giving it supplements for joint health can also be helpful. Before purchasing, consider asking for its elbow scores.

Cancer
The Golden Retriever Pitbull is prone to getting cancer. The Golden Retriever, one of its parents, has a 60% chance of getting some form of cancer, the highest of any breed. It might suffer from various cancers, and the symptoms range widely from lumps to lethargy to loss of appetite.

Selecting a reputable breeder who screens their breeding stock for cancer is an important step in decreasing the risk of cancer in your dog. Spaying or neutering it, and avoiding environmental risks from cigarette smoke, chemicals and sunlight are other measures you can take to protect your dog.

Heart Disease
With age, this type of Retriever Pit mix is genetically prone to heart disease, especially if it is overweight or has heartworm. It may have no symptoms at all, but if it does, symptoms include fatigue, frequent cough, shortness of breath, reduced appetite, weight gain/loss, and stomach swelling.

Selecting a reputable breeder who screens their breeding stock for heart disease, and preventing heartworm, are the only two ways to mitigate the risk of heart disease in your dog. Dogs can get heartworm from mosquitos, and some dogs show no symptoms, so your veterinarian may recommend regular preventative medication.

Cataracts
The Golden Retriever Pitbull mix is prone to cataracts, which could be present at birth or develop later. Cataracts are hereditary but can be caused by diabetes or eye trauma. They will result in your dog having trouble seeing and its eyes looking cloudy or a bluish-gray color.

Cataracts are generally not preventable, but you could select a reputable breeder and obtain your prospective dog’s ophthalmology test results before you purchase your dog. You can also maintain an ideal diet and weight for your dog to prevent diabetes.

The Golden Retriever Pitbull mix is intelligent enough to be easily trained by someone familiar with dog training. It should be trained from early puppyhood with short, positive training sessions where the trainer asserts a firm alpha position of dominance over the dog. 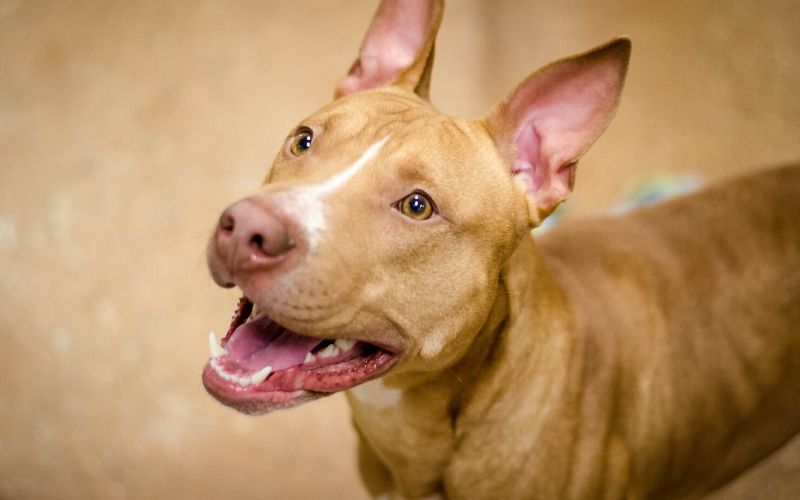 Is Easy to Train
This type of Retriever Pit’s intelligence level and people-pleasing nature mean that training is usually relatively easy and quick for an experienced trainer. This mix can be stubborn, so if you have not trained a dog before, consider letting an expert train this dog.

This Retriever Pit is a large dog that does best with an active lifestyle and frequent protein- and nutrient-rich meals. In fact, sufficient exercise and weight maintenance are crucial to disease prevention. It loves walks, jogs, hikes, and swims, and is in direct contrast with the “couch potato” lifestyle. 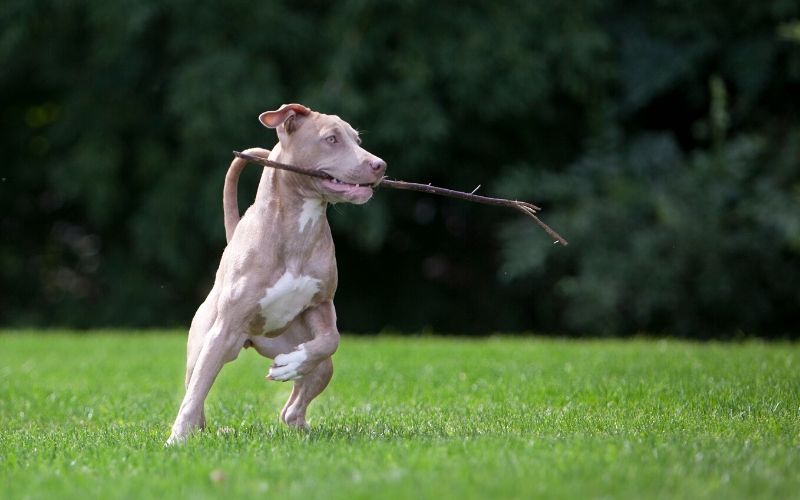 Eats 1600 Calories a Day
A puppy should eat four balanced and high-quality meals per day. As an adult, it should eat twice per day, for a total of 1,600 calories. You should replace a cup of formula with raw pork or poultry, and protein should be at least 18% of its diet.

Needs an Hour of Exercise Per Day
This mix is extremely high-energy. It needs at least one hour of exercise per day, and should also have daily play-time. If it does not get sufficient exercise, it may become obese. It has a lifespan of 10 to 12 years, on average, and sometimes up to 15 years.

Background & Pricing for a Puppy

Inquiries into the backgrounds of this type of Retriever Pit typically focus on its parents, who have long histories. Not much of the background of the mix is known. 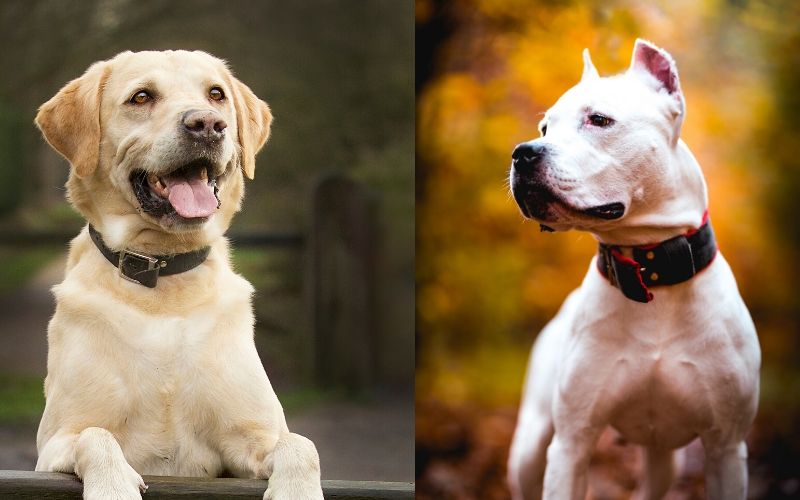 Price for a Puppy
The Golden Retriever Pitbull is a very unusual mix and is not popular. Reputable breeders are rare, and the mix may cost from US$1500 to US$2500, or perhaps more. You might consider adopting from a shelter. A rescue dog is cheaper, fully screened, and usually comes with a behavior assessment. 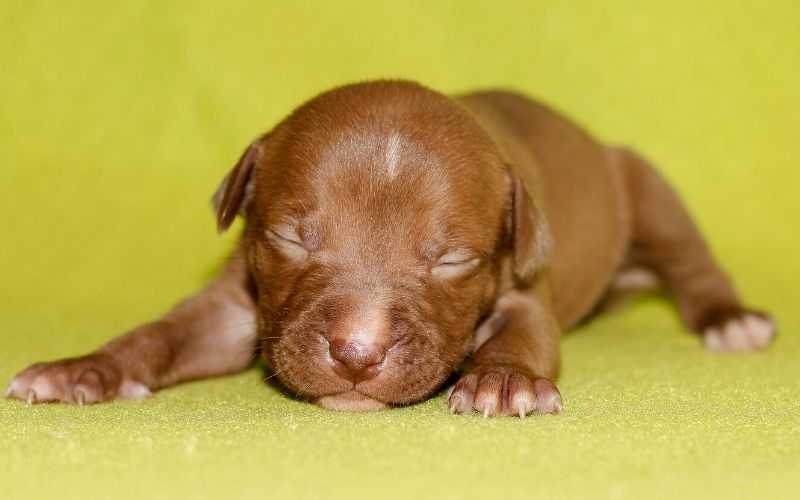 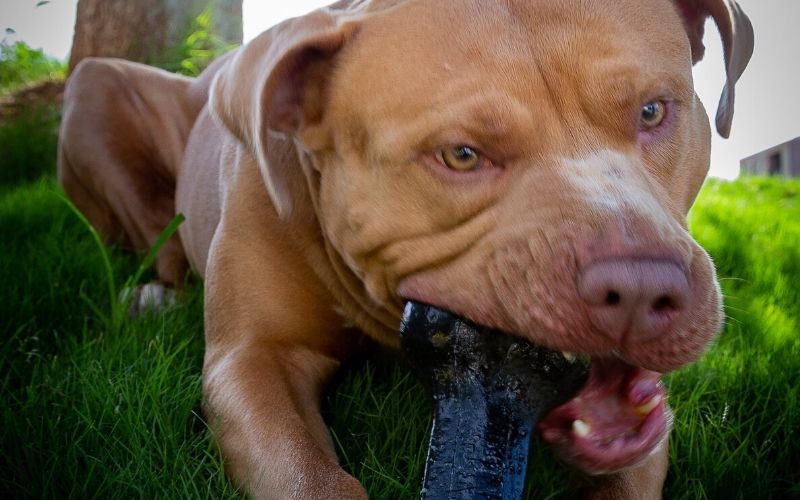 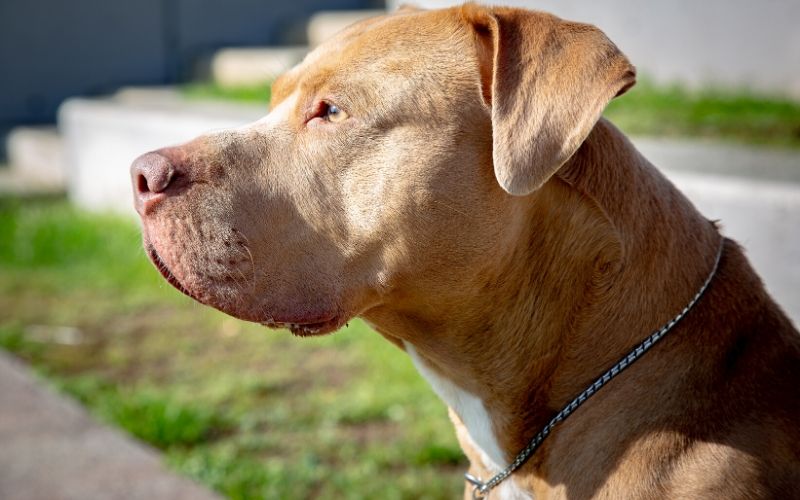 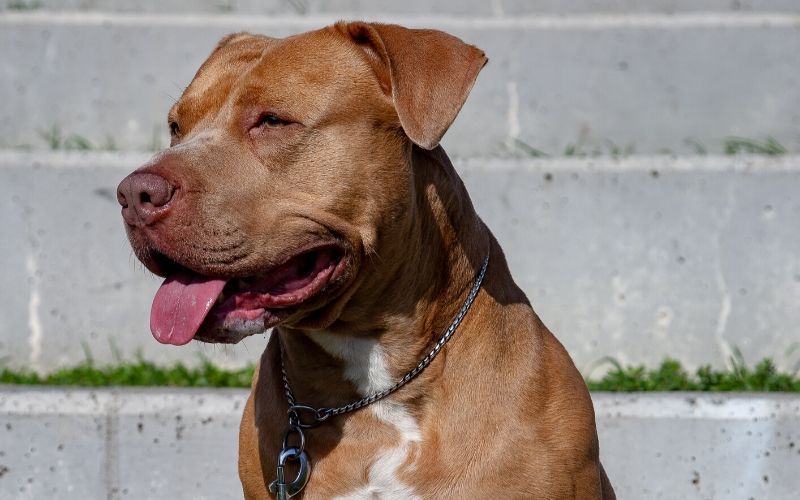 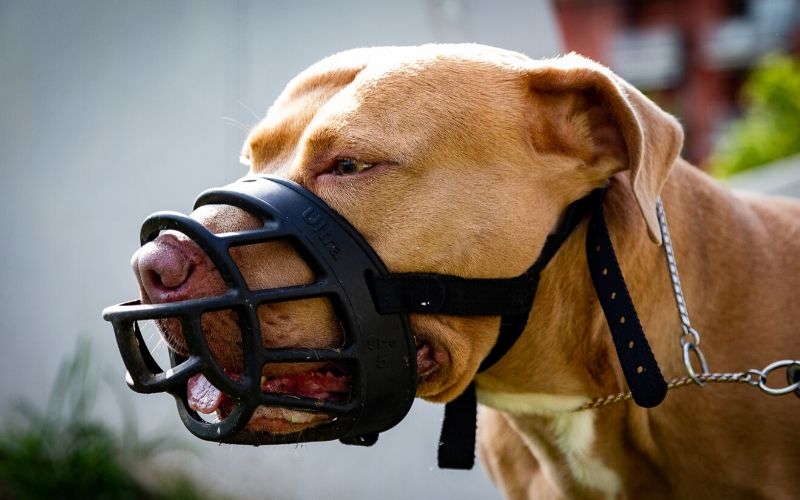 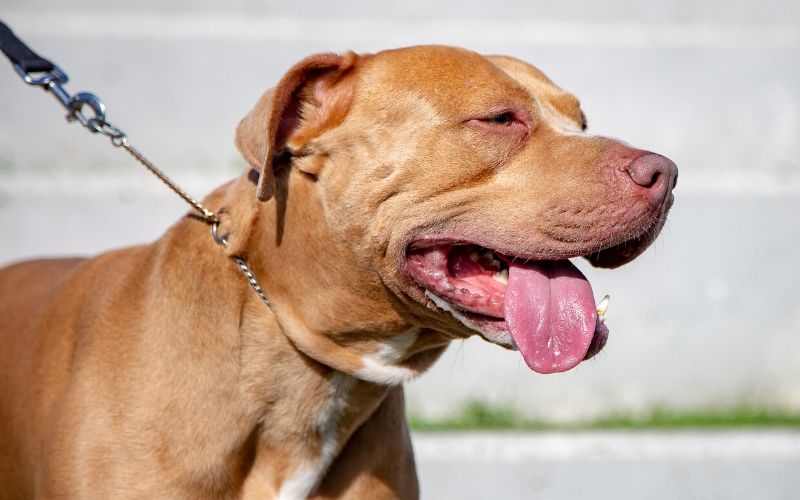 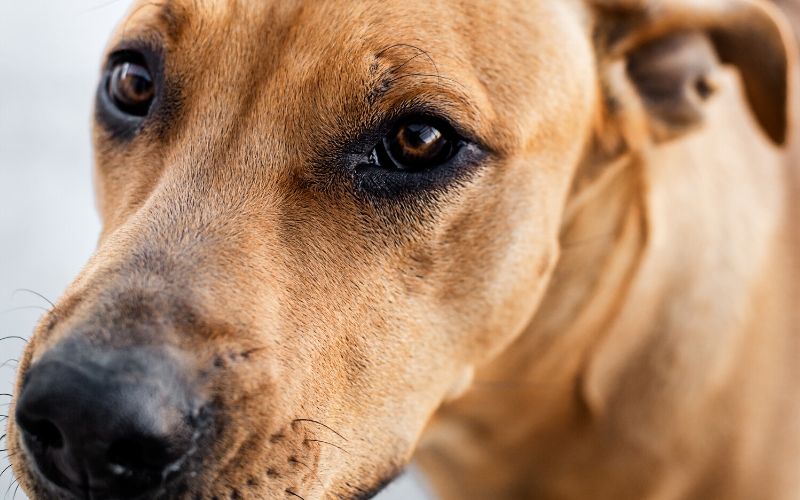 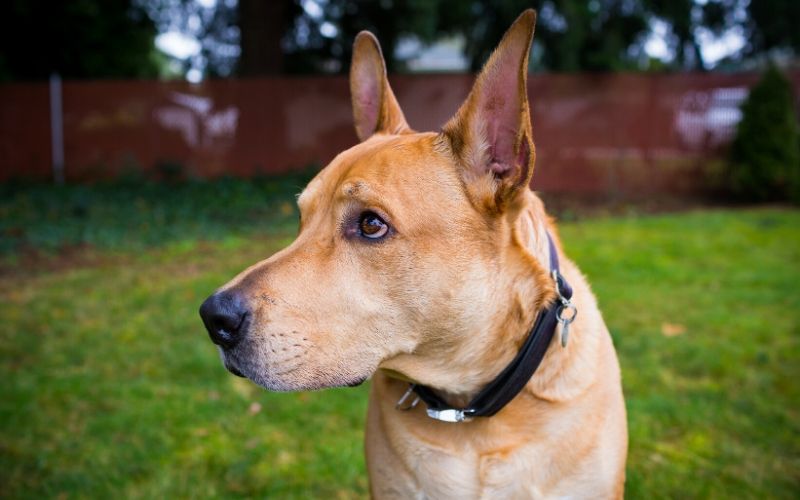 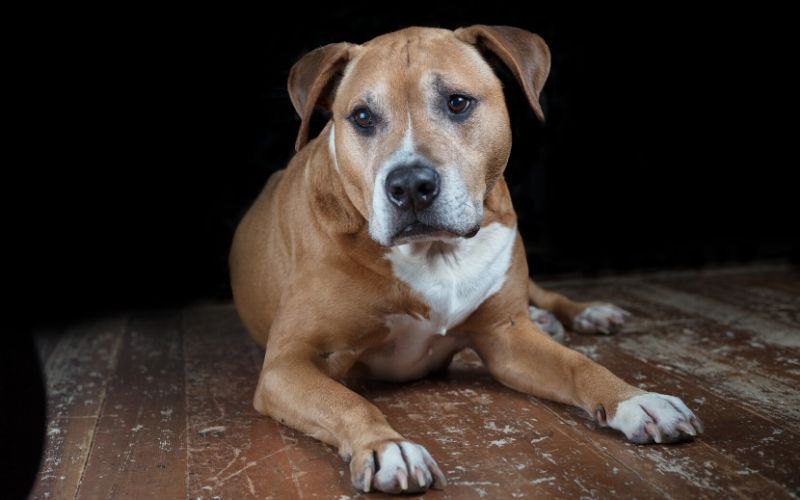 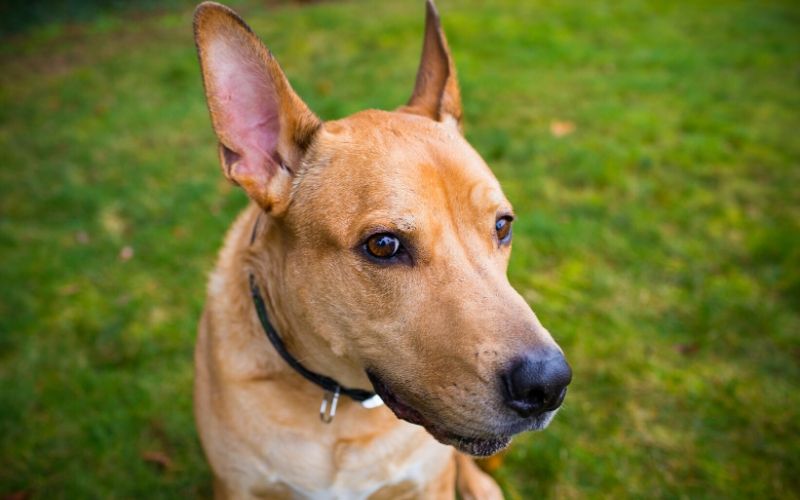 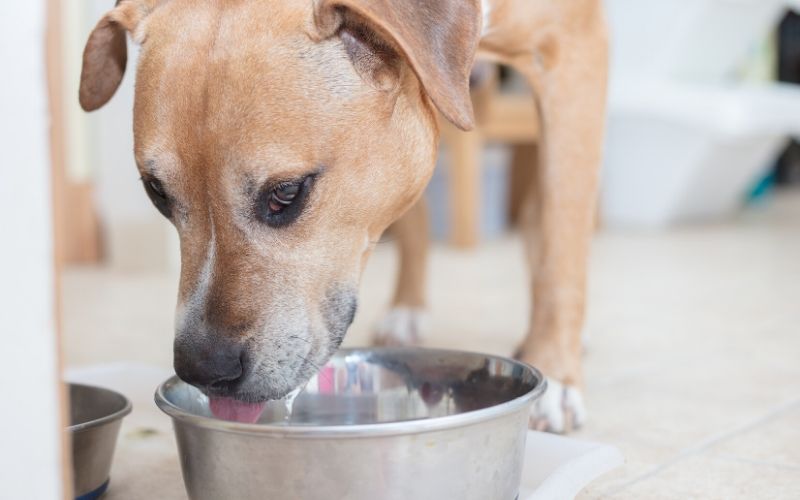 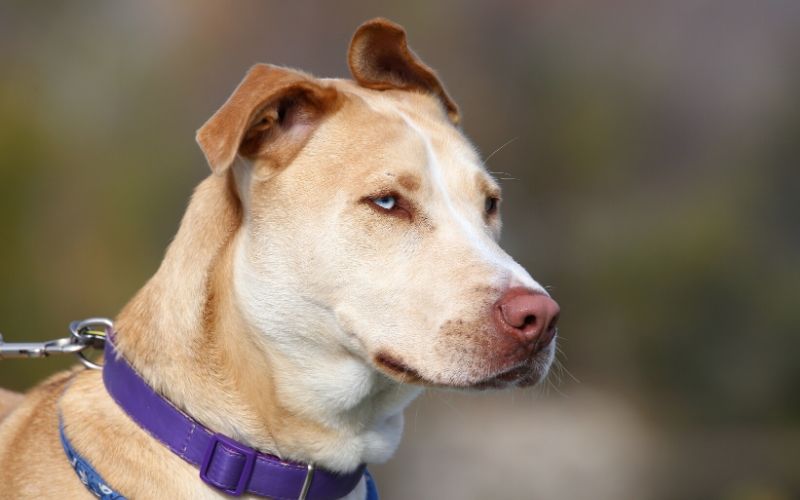 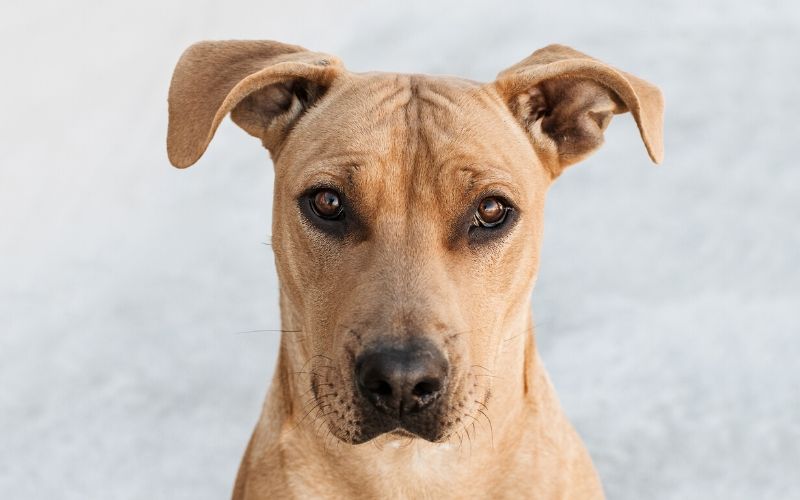 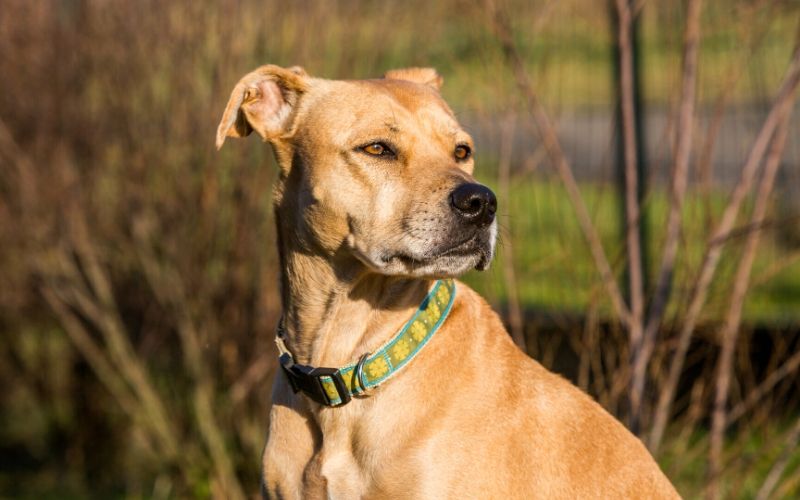 About the Author
Brandon Miller has a B.A. from the University of Texas at Austin. He is a seasoned writer who has written over one hundred articles, which have been read by over 500,000 people. If you have any comments or concerns about this blog post, then please contact the Green Garage team here.